For at least the last year, Cam has wanted us to be the voice of his stuffed animals, bath toys, action figures, and really anything with a face and a mouth. I still remember how he used to tell us to use a voice: “he talk.”

It used to be mostly in the bathtub where we would create stories with his magnetic fishes or the Dory figurines. We’d play hide-and-seek with the otter saying “hello!” when Cam found him under the bubbles.

More recently, this has picked up steam and I estimate that approximately 50% of our communications with Cam go through his toys. Sometimes when he is being difficult or defiant, we can get him over the hump by talking like a toy. Seriously.

Just this evening when Cam said “I’m still hungry” after he’d already eaten a few different post-dinner snacks, we told him to have some of my lemon chicken. He said he didn’t like lemon chicken. And so I told him that Iron Man loves it and said like Iron Man “I love lemon chicken, yum yum yum.” Cam immediately popped up and shoved a big piece of lemon chicken in his mouth.

I especially love when Cam gets used to Joe doing a particular voice and then he asks me to make Spiderman talk, but when I do he says (totally straight faced, totally serious), “that’s not his voice.”

While it’s ridiculous sometimes, most often he is expressing such rich imagination that it is so fun to listen to. It makes me smile. I love hearing him teach his animals how to brush their teeth and why it’s important. I love listening to him talk about his plan to build a cannon to launch the cannon ball into the alien guns. I love hearing him consult monkey on whether or not we picked the right bedtime books.

Side bar: he is obsessed with Joe’s childhood action heroes. Cam doesn’t even know where they come from and has never seen a movie or even a YouTube clip of them. He calls them “the superheroes” and takes them on our walks, takes them into the bathtub, props them up in a circle and gives them game pieces for a round of “Candy World” (Candy Land). It has been a few weeks now and the novelty hasn’t worn off. I think these guys are here to stay.

“See superheroes, this is how you brush your teeth.” 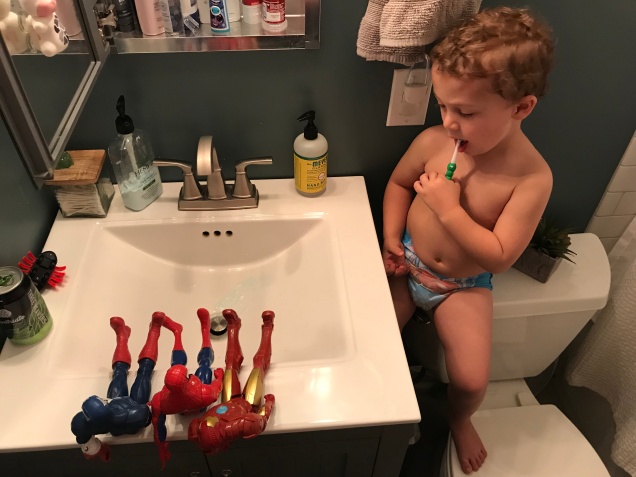 I think I’ll be asking Cam to finish his dinner with Captain America’s voice for the foreseeable future. And that’s okay with me. 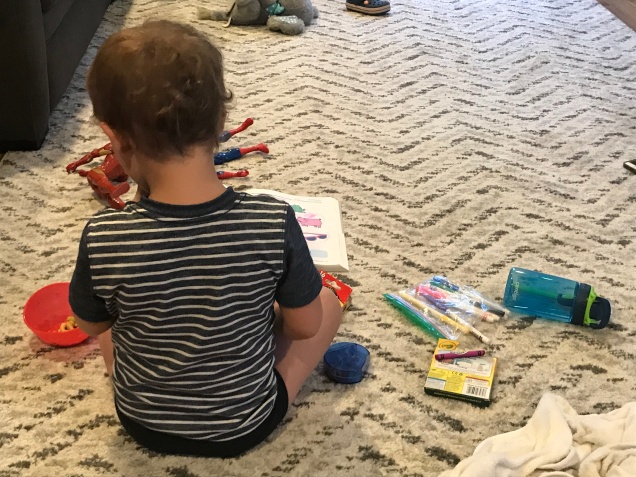 One thought on “Real Stat: 50% of Life with Cam is Spent Talking Like a Character”