Cam’s bedtime routine has changed over time, but for a while now, it has been pretty much the same. After brushing teeth, Cam gets his milk and (shamefully) his “baba,” then we read stories, turn off the lights, play music and fall asleep.

When Cam moved into the bigger room, but my office wasn’t yet built, his room housed all my work equipment, so ‘turning off the lights’ was an ordeal. We had to lay cloths or papers over the top of my desk phone and cell phone, over the charging light on my laptop, Joe’s blinking light on his laptop and any number of other random sources of light so it was perfectly dark and we could turn Cam’s stars on.

Apparently he’s right on time with his fear of the dark. I get a weekly email from Baby Center and the one last week for kids who are 2 years, 11 months and 3 weeks discusses our 2-year-olds becoming afraid of the dark. How do they know!?

So instead of telling Cam he’s not afraid of the dark, we bought him a new night light. And. He. Is. Obsessed.

Meet “beary,” also known as “the sweetest guy I ever had.” 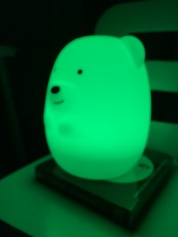 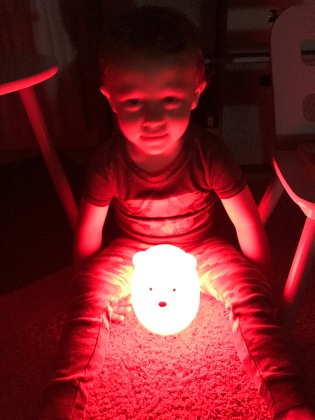 He took photos of him. A lot of photos. Sat him on a chair so he could sit next to him. He read him a book. He took him on a walk. He tucks him in. Yes, he’s obsessed.

And now we go to bed in a discotech.